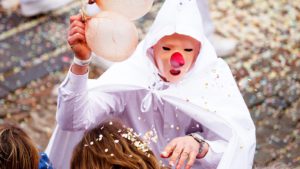 The reigning Prince-Abbott prohibited the clergy from joining in this popular celebration, so the crowd recalled the jovial presence of the missing monks by donning a robe and hood similar to their outfits and the colour of their clothing. After new prohibitions, only one get-up, a white one, would still be fairly close to the monks’ habit. A long nose and a laughing mask would round off the costume.

Today, this is a fairly well accepted legend that was bolstered further in 1947 when Walter Fostier, sometimes referred to as the author of this pseudo-historical fantasy, used it for the foundation of a brotherhood. As a friend of Stavelot and its folklore, he was also the one who created the superbly surprising Honour Guard in 1950.

In the 19th century other societies had been established: les Gais Amis, l’Orphée, la Bourgeiose, L’Emulation. Two marching bands are still particularly active now at the beginning of the 21st century.

Times were hard at the end of the 19th-century, so the Laetare celebrations were an opportunity for highly appreciated social aid. This was also the beginning of the Artisans.

During the first half of the 20th century, Stavelot-Attractions were very active in promoting tourism, leading to the development of Stavelot-Commerces. The Bons Amis were the driving force behind this new impetus, with the help of the St.-Laurent Committee, Orphée, … Emulation and shortly afterwards, a Festivities Committee.

After 1945, 21 young men fostered the birth, or rather the rebirth, of the Blancs Moussis.

In 1950, the Reveil Ardennais took part in Laetare.

This was a great decade for the development of folklore and tourism.

all these have made the rising star of Laetare one of the brightest in Walloon and European folklore. (40 000 people in 1954).

prance through the streets leading a parade of more than 2000 participants, most of them from Stavelot itself. One townsman out of three participates actively, making Stavelot the unchallenged capital of Laetare.

The Walloon Region’s determination to maintain its rich heritage and culture has also given new encouragement to the restored abbey and to Stavelot and its population.